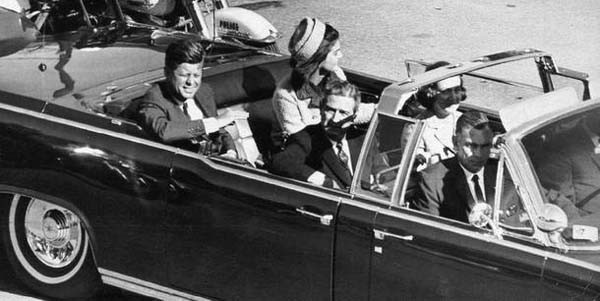 The Truths and Lies Behind the JFK Assassination

There are risks and costs to action. But they are far less than the long-range risks of comfortable inaction.” — JFK
Nandini Rawat

John Fitzgerald Kennedy, often referred to by his initials JFK, was the 35th President of the United States. One of the youngest presidents that the US has even had, Kennedy was an icon of youth, energy, change and hope amongst the people. Although he served as a president only for a thousand days, his popularity continues to echo even fifty years after his assassination. The charismatic leader was shot and killed in Dallas, Texas on November 22, 1963. While many officials have tried to ignore the conspiracy theories revolving around his death, nothing was really ‘normal’ about the JFK assassination. Officially it is believed that President Kennedy was struck by two bullets — one in the head, one in the neck — while riding in an open-topped limousine through Dealey Plaza in Dallas. Lee Harvey Oswald was charged with killing him, and a presidential commission headed by Chief Justice Earl Warren found that Oswald acted alone.

But through the ABC News poll in 2003, it was revealed that 70% of Americans believe that Kennedy’s death was the result of a broader plot. Well of course it was!

Let’s look into some facts:-

The vehicle was not safe. The route had about a dozen of possible firing points. And you still expect the President to come out of that excited crowd of Dallas all alive, in one piece? Certainly not!

Some other facts that make the assassination mysterious involve the assassin Lee Harvey Oswald and the suspicious “umbrella man”.

Connecting the above three facts, we can deduce that Oswald was definitely not the only person or gunman involved in the assassination. There were more people who were a part of this plot. The word “allegedly” on the historical marker itself proves how fragile the belief — that Oswald was the only man involved — is. If it is assumed that there was a second gunman, possibly located near the grassy knoll, then this further leads us to the suspicious presence of the “umbrella man”.

The “umbrella man” was a man named Louie Steven Witt. He was the only person seen carrying a black coloured umbrella on that sunny day. He was also one of the closest bystanders to President Kennedy when Kennedy was first struck by a bullet. As the president’s limousine approached, the man opened up and lifted the umbrella high above his head, then spun the umbrella from east to west (clockwise) as the president passed by him. In the aftermath of the assassination, the “umbrella man” sat down on the sidewalk next to another man, as if nothing happened.

Two possible theories follow this. First, Louie Steven Witt could have been positioned as a signaler fo the second gunman to fire a bullet. And second, the umbrella used by Witt could possibly have an internal dart-shooting system which was used to shoot a dart at Kennedy and immobilise him. Although this popular second assumption was refuted after an inspection, there is no evidence that Louie Steven Witt was the “real umbrella man”.

The case of JFK’s assassination has been picked up several times throughout history and still remains to be a topic of interest for many conspiracy theorists. Every time the case has been touched, a new piece of information has been added to it. Surely there are many truths and lies behind the JFK assassination, but the real reason behind the president’s assassination died along with him on that sunny Dallas day.